Can I have more than one instance of a Recurrence Template per day?

Recurrence Templates are much more than a recurring event – a Recurrence Template is a template from which you can create future events (called “Instances” in VolunteerHub) in a few simple clicks without having to recreate the same event over and over.  This functionality is modeled on Recurring Meetings in Outlook, and like Outlook each Template is limited to one instance per day.

Why one instance per day?

Aside from functioning like Recurring Meetings in Outlook, limiting to one instance per day limits the likelihood of accidentally creating duplicate instances of the same event on the same day.

An additional benefit is the ability to change the times of existing instances en masse.  For example, if 365 instances of an event were added and the administrator realized they had put the wrong time, there wouldn't be a clean way to resolve this as the times exist within each instance, not as a part of the Template.  Because you can only have a single instance per day, this situation can be resolved quickly by re-adding instances to the same days with the updated times.  This will change the times on the existing instances -- not creating second events or even replacing those events.  If a volunteer was already signed up, they would remain signed up.

How do I handle multiple shifts in the same day?

For events that have multiple shifts, like an AM and a PM shift, this would be accomplished with a second Template.  Once the first Template is made, it can be copied and renamed to reflect that it is the second shift.

Click the ellipsis for the Template and choose 'Save Copy of Template.' 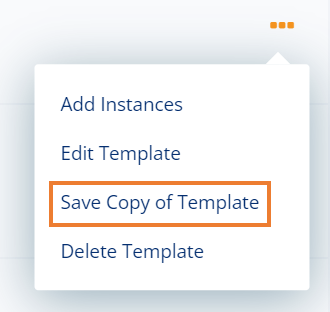 This creates an exact duplicate of the template but adds "Copy of" to the title.  Edit the copy and change the name to reflect it being the other shift.  Then add the instances.

M
Matthew is the author of this solution article.

Did you find it helpful? Yes No

Send feedback
Sorry we couldn't be helpful. Help us improve this article with your feedback.